Figure 3: dplyr leftjoin Function. The difference to the innerjoin function is that leftjoin retains all rows of the data table, which is inserted first into the function (i.e. Have a look at the R documentation for a precise definition: Example 3: rightjoin dplyr R Function. Right join is the reversed brother of left join. Outer join data.table R. Ask Question Asked 8 years, 4 months ago. Active 8 years, 4 months ago. Viewed 12k times 15. Just wondering if there is an efficient way.

It’s rare that a data analysis involves only a single table of data. Typically you have many tables of data, and you must combine them to answer the questions that you’re interested in. Collectively, multiple tables of data are called relational data because it is the relations, not just the individual datasets, that are important.

Relations are always defined between a pair of tables. All other relations are built up from this simple idea: the relations of three or more tables are always a property of the relations between each pair. Sometimes both elements of a pair can be the same table! This is needed if, for example, you have a table of people, and each person has a reference to their parents.

The most common place to find relational data is in a relational database management system (or RDBMS), a term that encompasses almost all modern databases. If you’ve used a database before, you’ve almost certainly used SQL. If so, you should find the concepts in this chapter familiar, although their expression in dplyr is a little different. Generally, dplyr is a little easier to use than SQL because dplyr is specialised to do data analysis: it makes common data analysis operations easier, at the expense of making it more difficult to do other things that aren’t commonly needed for data analysis. 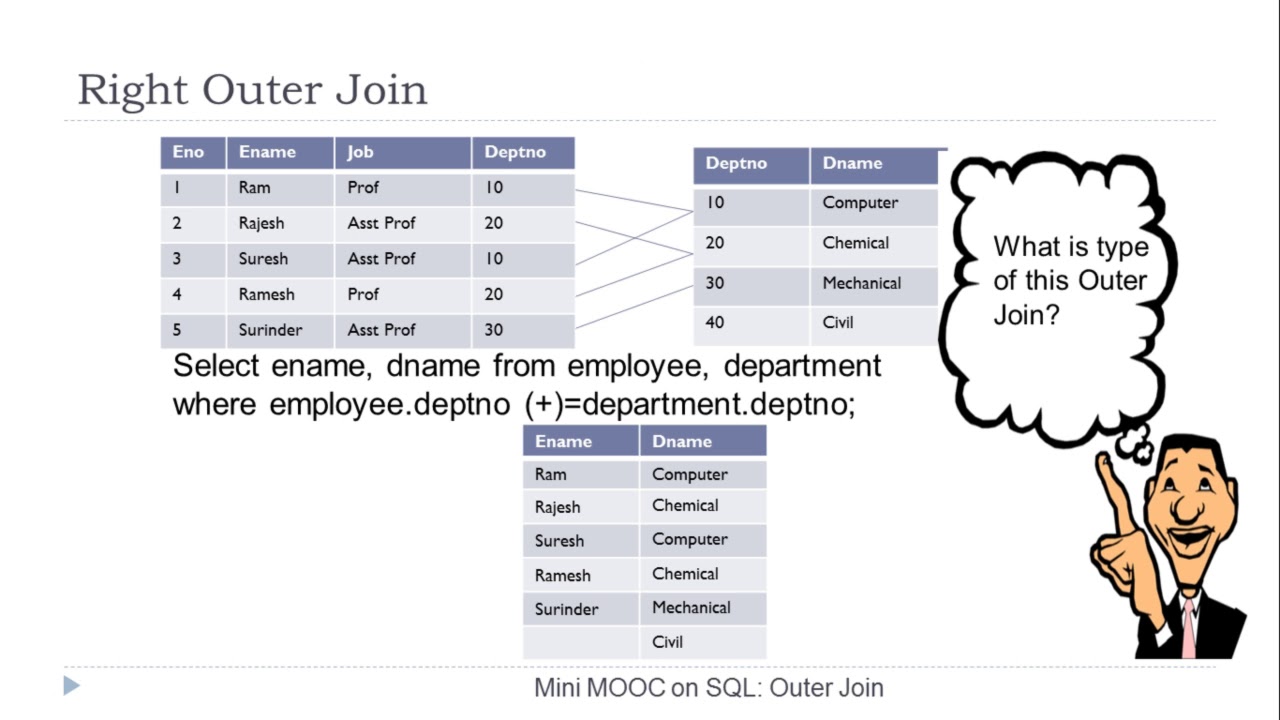 We will explore relational data from nycflights13 using the two-table verbs from dplyr.

We will use the nycflights13 package to learn about relational data. nycflights13 contains four tibbles that are related to the flights table that you used in data transformation:

One way to show the relationships between the different tables is with a drawing:

There are two types of keys:

Once you’ve identified the primary keys in your tables, it’s good practice to verify that they do indeed uniquely identify each observation. One way to do that is to count() the primary keys and look for entries where n is greater than one:

Sometimes a table doesn’t have an explicit primary key: each row is an observation, but no combination of variables reliably identifies it. For example, what’s the primary key in the flights table? You might think it would be the date plus the flight or tail number, but neither of those are unique:

When starting to work with this data, I had naively assumed that each flight number would be only used once per day: that would make it much easier to communicate problems with a specific flight. Unfortunately that is not the case! If a table lacks a primary key, it’s sometimes useful to add one with mutate() and row_number(). That makes it easier to match observations if you’ve done some filtering and want to check back in with the original data. This is called a surrogate key.

A primary key and the corresponding foreign key in another table form a relation. Relations are typically one-to-many. For example, each flight has one plane, but each plane has many flights. In other data, you’ll occasionally see a 1-to-1 relationship. You can think of this as a special case of 1-to-many. You can model many-to-many relations with a many-to-1 relation plus a 1-to-many relation. For example, in this data there’s a many-to-many relationship between airlines and airports: each airline flies to many airports; each airport hosts many airlines.

The first tool we’ll look at for combining a pair of tables is the mutating join. A mutating join allows you to combine variables from two tables. It first matches observations by their keys, then copies across variables from one table to the other.

Like mutate(), the join functions add variables to the right, so if you have a lot of variables already, the new variables won’t get printed out. For these examples, we’ll make it easier to see what’s going on in the examples by creating a narrower dataset:

(Remember, when you’re in RStudio, you can also use View() to avoid this problem.)

Imagine you want to add the full airline name to the flights2 data. You can combine the airlines and flights2 data frames with left_join():

The result of joining airlines to flights2 is an additional variable: name. This is why I call this type of join a mutating join. In this case, you could have got to the same place using mutate() and R’s base subsetting:

But this is hard to generalise when you need to match multiple variables, and takes close reading to figure out the overall intent.

The following sections explain, in detail, how mutating joins work. You’ll start by learning a useful visual representation of joins. We’ll then use that to explain the four mutating join functions: the inner join, and the three outer joins. When working with real data, keys don’t always uniquely identify observations, so next we’ll talk about what happens when there isn’t a unique match. Finally, you’ll learn how to tell dplyr which variables are the keys for a given join.

To help you learn how joins work, I’m going to use a visual representation:

A join is a way of connecting each row in x to zero, one, or more rows in y. The following diagram shows each potential match as an intersection of a pair of lines.

(If you look closely, you might notice that we’ve switched the order of the key and value columns in x. This is to emphasise that joins match based on the key; the value is just carried along for the ride.)

The simplest type of join is the inner join. An inner join matches pairs of observations whenever their keys are equal:

(To be precise, this is an inner equijoin because the keys are matched using the equality operator. Since most joins are equijoins we usually drop that specification.)

The output of an inner join is a new data frame that contains the key, the x values, and the y values. We use by to tell dplyr which variable is the key:

The most important property of an inner join is that unmatched rows are not included in the result. This means that generally inner joins are usually not appropriate for use in analysis because it’s too easy to lose observations.

These joins work by adding an additional “virtual” observation to each table. This observation has a key that always matches (if no other key matches), and a value filled with NA.

The most commonly used join is the left join: you use this whenever you look up additional data from another table, because it preserves the original observations even when there isn’t a match. The left join should be your default join: use it unless you have a strong reason to prefer one of the others.

Another way to depict the different types of joins is with a Venn diagram:

However, this is not a great representation. It might jog your memory about which join preserves the observations in which table, but it suffers from a major limitation: a Venn diagram can’t show what happens when keys don’t uniquely identify an observation.

So far all the diagrams have assumed that the keys are unique. But that’s not always the case. This section explains what happens when the keys are not unique. There are two possibilities:

So far, the pairs of tables have always been joined by a single variable, and that variable has the same name in both tables. That constraint was encoded by by = 'key'. You can use other values for by to connect the tables in other ways:

base::merge() can perform all four types of mutating join:

The advantages of the specific dplyr verbs is that they more clearly convey the intent of your code: the difference between the joins is really important but concealed in the arguments of merge(). dplyr’s joins are considerably faster and don’t mess with the order of the rows.

SQL is the inspiration for dplyr’s conventions, so the translation is straightforward:

Note that “INNER” and “OUTER” are optional, and often omitted.

Joining different variables between the tables, e.g. inner_join(x, y, by = c('a' = 'b')) uses a slightly different syntax in SQL: SELECT * FROM x INNER JOIN y ON x.a = y.b. As this syntax suggests, SQL supports a wider range of join types than dplyr because you can connect the tables using constraints other than equality (sometimes called non-equijoins).

Filtering joins match observations in the same way as mutating joins, but affect the observations, not the variables. There are two types:

Semi-joins are useful for matching filtered summary tables back to the original rows. For example, imagine you’ve found the top ten most popular destinations:

Now you want to find each flight that went to one of those destinations. You could construct a filter yourself:

But it’s difficult to extend that approach to multiple variables. For example, imagine that you’d found the 10 days with highest average delays. How would you construct the filter statement that used year, month, and day to match it back to flights?

Instead you can use a semi-join, which connects the two tables like a mutating join, but instead of adding new columns, only keeps the rows in x that have a match in y:

Only the existence of a match is important; it doesn’t matter which observation is matched. This means that filtering joins never duplicate rows like mutating joins do:

The inverse of a semi-join is an anti-join. An anti-join keeps the rows that don’t have a match:

Anti-joins are useful for diagnosing join mismatches. For example, when connecting flights and planes, you might be interested to know that there are many flights that don’t have a match in planes:

The data you’ve been working with in this chapter has been cleaned up so that you’ll have as few problems as possible. Your own data is unlikely to be so nice, so there are a few things that you should do with your own data to make your joins go smoothly.

Be aware that simply checking the number of rows before and after the join is not sufficient to ensure that your join has gone smoothly. If you have an inner join with duplicate keys in both tables, you might get unlucky as the number of dropped rows might exactly equal the number of duplicated rows! 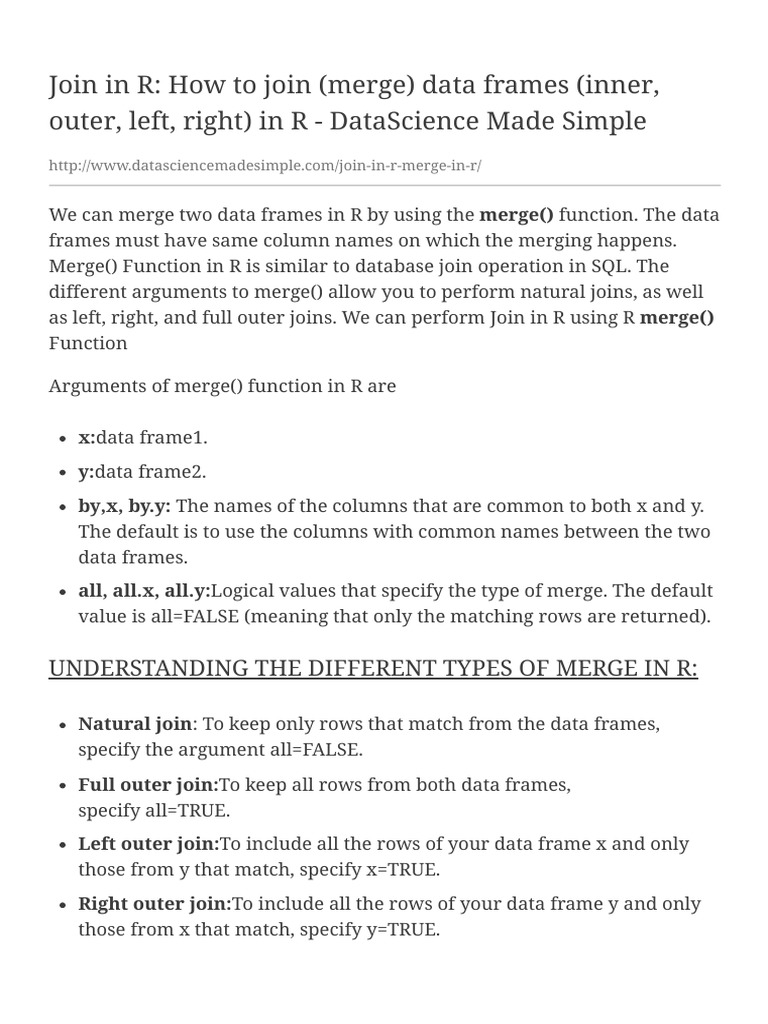 The final type of two-table verb are the set operations. Generally, I use these the least frequently, but they are occasionally useful when you want to break a single complex filter into simpler pieces. All these operations work with a complete row, comparing the values of every variable. These expect the x and y inputs to have the same variables, and treat the observations like sets:

Given this simple data:

The four possibilities are: