We just released a Feb. 5 '89 prototype of DuckTales for the NES!
If you'd like to support our preservation efforts (and this wasn't cheap), please consider donating or supporting us on Patreon. Thank you!

Yu-Gi-Oh! Forbidden Memories takes place in Ancient Egypt. You play the Prince of the dynasty, who has to reclaim his throne after High Priest Heishin and his right-hand man, Seto, overthrew the Pharaoh. This game is well-known for being one of the hardest in the license, just after Reshef of Destruction.

Each field type has a dedicated block of data in the ROM for storing things such as fusions and AI routines. This means that per-field fusions and AI behavior are possible, but this functionality is unused.

A hidden debug menu is located on the main menu, below 'Save'. It can be accessed by pressing ✖ with the GameShark code 80184594 000B activated on the main menu (deactivate it once you're in the debug menu). On real hardware, especially when using the disc-based version of the GameShark, you can include the code D009B390 0080 before 80184594 000B so that the GameShark code is only activated when pressing the Square button, allowing you to navigate the debug menu normally afterwards.

Pressing Select displays a second page with a '2P' option and many blank entries; with one exception, these either return you to the first page, or are copies of the first menu.

Starts a 3D battle between two Blue-Eyes White Dragons with the title screen music, or replays the last 3D battle you saw since you've powered-up the console. Then it returns to the debug menu.

Lets you play any cutscene from the game, allowing you to play the game from that point, like a level select menu. The cursor and current ID aren't displayed on-screen. You start at ID 0x500, press Up and Down to change the ID, press Left and Right to switch to another digit, and press ✖ to play the selected cutscene. IDs 0x400 to 0x4FF are copies of IDs 0x500 to 0x5FF.

Starts a Free Duel against Simon Muran, then returns to the debug menu. 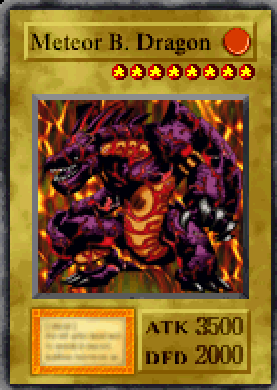 Displays your card collection. Pressing ⚪ sends you back to the debug menu.

Displays the 3D map. You may access some locations you shouldn't be able to reach at that point of the story if you didn't beat the World Tournament in your save file.

Displays the deck edit screen. Pressing ⚪ sends you back to the debug menu.

Display the Free Duel menu. You can battle the opponents you've unlocked, but pressing ⚪ returns to the title screen, rather than the debug screen. Re-accessing the debug menu without loading your save file will keep the cards you've won.

Displays the name entry screen. You can change your name in your save file that way.

Starts a trade between the two Memory Cards. Works as intended.

Displays the option screen. Pressing ⚪ sends you back to the debug menu.

Displays the Game Over Screen, then returns to the debug menu.

Screen fades out, then the game freezes trying to display another screen. This option is most likely named after Hidehiro Hirata, who is listed in the game's credits as 'Thought Logic Design'.

Starts a battle between the two Memory Cards. Works as intended.

If no Campaign duel was played before: starts a Duel, entirely controlled by the AI, using Simon Muran's deck for both duelists, with the title screen music.

Since the AI always go second in this game, it never has to check whether or not it is the first turn of the duel. As a result, the AI can make a direct attack on the first turn in this mode. You don't get any reward regardless of which AI wins (it displays 000 as a card drop, but the game doesn't even attempt to add it to your card pool).

If a campaign duel was played before: redo the last duel played, continuing the story from there.

In the image data for character portraits, there exist some placeholder images, labelled as being 'not registered'.