AstroImager is a powerful, but easy-to-use image-capture application for astrophotography. It can be used as a client to any remote or local INDI server with any supported CCD, filter wheel, or focuser. The built-in drivers support the following hardware:

A versatile image display, time-series stacks, a link to Astrometry.net for adding coordinates, built-in AstroCCto set and time and place, links to Simbad for object identification, and exoplanet model fitting. It is available for Windows, Mac OS X, and Linux by After installation, the built-in Help-Update option keeps your version current.

AstroImager also controls the set point cooling and the mechanical shutter of the attached camera (if available). It can preview or capture and save images to selected folder with any file name prefix, count, duration and time lapse, browse captured images and show them in Finder, zoom and stretch them automatically or manually. It can measure FWHM and the drift of a selected star to help easier and faster focus and align your equatorial telescope mount. Captured images can be plate-solved using public astrometry.net service or local Astrometry for OS X application. Images are stored in FITS format using CFITSIO library with user defined keywords and can be debayered automatically during preview with custom offsets. Two separate filter name sets can be used for easier change of carousels. AstroImager is a member of our amateur astrophotography tools family including AstroTelescope, AstroGuider, and FITS Preview.

The stars: distant suns. This site reflects the culmination of mypersonal quest to become an astroimager - an amateur astronomer whoseavocation is to capture images of the celestial wonders that pass overour heads, largely unnoticed, every day. Thus, this is the triumph of myquest to photograph the distant suns of our Universe - a sun quest.

This journey began with the construction of an observatory in the NewMexico desert, far away from the lights of major towns and hugecities. This resulted in theBunker Ranch Observatory.There you'll find pictures, descriptions, and accounts of the processof building the observatory, and information on the equipment used totake the images herein.

Night Gallery (Picture, if you will, a dark sky ..)

Click on the thumbinail imagesbelow to bring up a full-sized image.

We begin with the first astrophoto taken with the BRO's major instrument,a 400mm (16') Hypergraph.This is M13, the famous globular cluster in Hercules,in a 30-minute exposure with a Pentax 67 camera loaded with Ilford 3200film. Note the well-known 'X' across the center of the cluster.

Globular clusters (so-named for their roughly spherical shape)are very old; they were, in fact, the first large structuresto form at the birth of the Milky Way Galaxy about ten billion years ago.There are about 60 of theseclusters in a roughly spheroidal pattern co-centered with thegalactic disk.

An average globular contains perhaps 100,000 stars; M13 is rather largerthan that, containing several hundred thousand. One estimate even placesthe number of stars at over a million.

Below is the first color image taken with the observatory's STL-11000XMCCD camera. This is an LRGB composite of 5-minute images of the Flameand Horsehead Nebulas in Orion. The camera was attached to a Borg 125EDoperating at f/4 for a focal length of 500mm.

The glowing clouds here shine by fluorescence from the ultraviolet lightemitted by the hot blue stars in the area. The 'Horsehead'visible against the red cloud is a dark dust nebula that is absorbing thered light from the cloud. 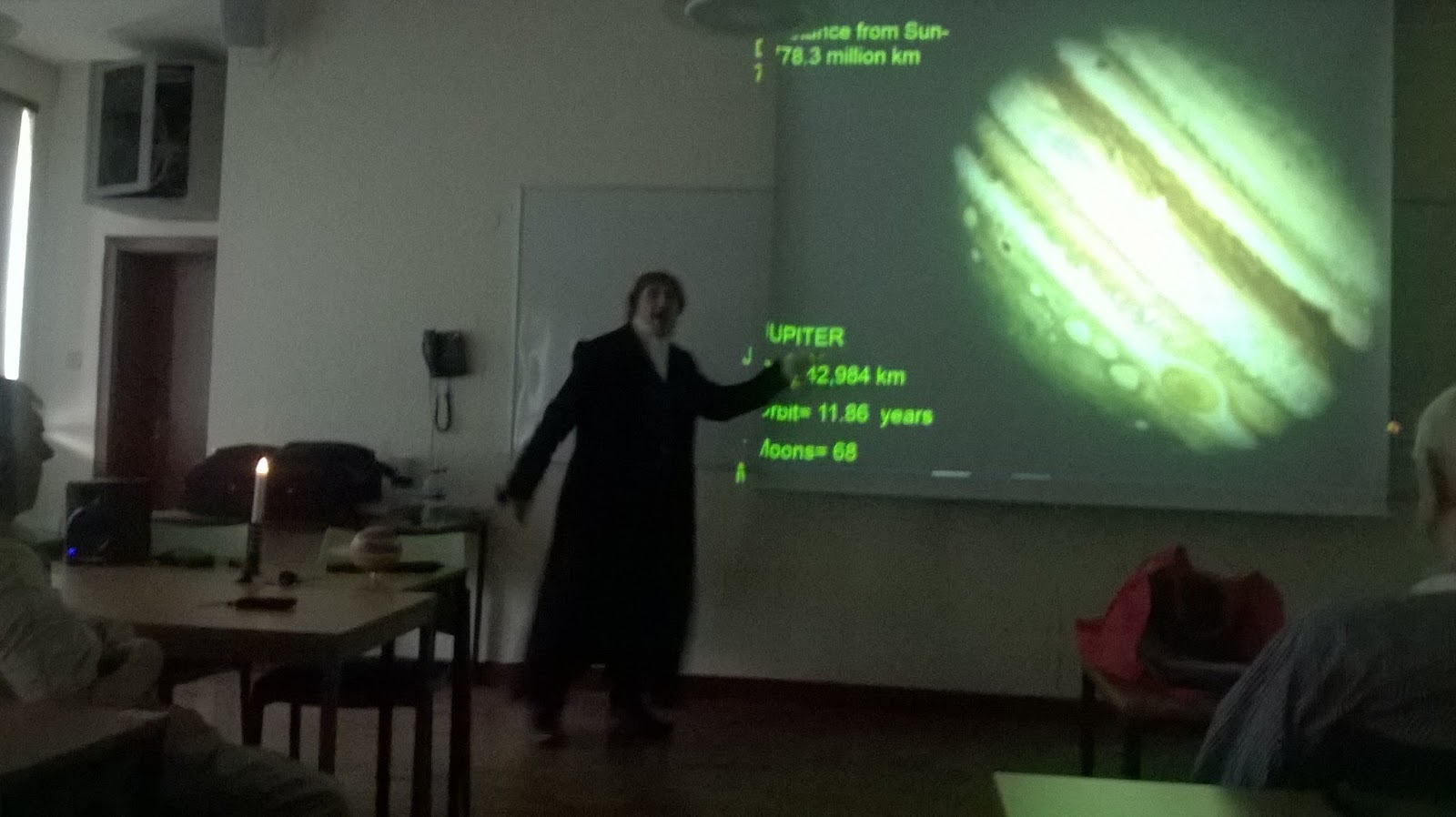 Here is another color image of the same area, taken with the same camerabut a different telescope. The telescope used for this image is a TakahashiBRC-250, which is twice the diameter of the Borg 125ED (so it gathers 4 timesas much light), but also 3 times the focal length (so the'magnification' is 3 times higher). You'll note that there is morevisible detail here; you'll also note that my image-processing skills haveimproved somewhat over the previous image ..

The Bunker Ranch Observatory's blog has an article onhow this image was made.

The yellowish and reddish clouds in this image are huge clouds of hydrogengas inside the Milky Way Galaxy. The colors are different due to differingoverall chemical composition, with the red being more pure hydrogen. Theseare, of course, far thinner than the water-vapor clouds in Earth's atmospherethat you're used to seeing;the hydrogen clouds contain only a few dozen atoms in the volume of anaverage-sided room.

This is an image of Comet Holmes -- a small comet out by the orbit of Jupiterthat came to fame with a sudden outburst of gasses that increased itsbrightness by more than a million times, and made it an easy naked-eyesight in late 2007. This is a short exposure designed to capture detailsof the comet's nucleus, within the faintly visible halo that was stilleasily visible as it grew larger than the Sun.

Again taken with the Borg 125ED and the STL CCD camera,here is a short (one-minute)exposure of the North America Nebula (NGC7000),demonstrating that a CCD camera cancapture images with far shorter exposure times than film (with some helpfrom a bit of digital image processing).

This is another one-minute image from the Borg 125ED and STL CCD camera -the Pleiades (M45). This is a fairly young association of stars that wereal born together out of the same gas cloud. The haze (blue in color images)around the starsis a dust cloud that the stars are passing through, unrelated to the gascloud where the stars were born.

Everything came together one night in November of 2008 -- the sky wasn'tthe blackest, and the seeing wasn't the steadiest, but the equipment alldecided to give me a break and work to perfection for oneshining moment. The result was this image of M33, a nearby spiral galaxy.

This is a composite of five 15-minute exposurestaken with the 400mm (16') scope, with some minimal imageenhancement to bring out some of the fainter detail. The full-sizeimage is large, but, I think, worth a look.

And now for some more color - this is the Borg 125ED and STL CCD camera again;but here we combine four 20-minute images (one each in white, red, green,and blue light), to get a shot of the Rosette Nebula (the nebula is designatedNGC 2237; the open cluster of stars inside the nebula is NGC 2244).Note that this imageis only 1/4 the size of the original in width and height; that means theoriginal image has 16 times more data than seen here!(Well, actually, it's worse than that, because the original is 16 bits perpixel while this is only 8 bits per pixel. So the original really has 4,096times the data of this image - 4 times the resolution both horizontally andvertically, and 256 times the color information.)