The AppleScript Language Guide—still the primary official documentation, and an important source of information, even though it often obfuscates more than it explains and is valid only to Version 1.3.7. While adayzdone's answer should work and almost does, there is a catch - which may or may not be a problem (observed on Chrome 21.0.1180.89 on Mountain Lion) update: still applies as of Chrome 47.0.2526.106 on OSX 10.11.2. While the solution will show the desired window as the front window, Chrome will NOT treat it as the front window if a different window was previously active. Jon's Commands is a Scripting Addition that is used to delete 'Network Trash Folder' contents. It also provides added functionality in the form of about 30 useful commands which can. I'm trying to parse an HTML file which I have converted to a TXT file inside of Automator. I previously downloaded the HTML file from a website using Automator, and I am now struggling to parse the.

From Wikipedia's entry on AppleScript:

If you wanted to write an AppleScript to open my app Acorn, it would look like this:

If you then wanted to tell Acorn to quit, it would look like this:

If you invoke Siri and say 'tell application Acorn to open' then Acorn will open up which is pretty awesome. If you use the latter command, Siri will respond:

To close an app, press Command - Q on your keyboard. If that doesn't work, open the  menu and chose Force Quit.

The very first AppleScript command I baked into Acorn goes as follows:

The command is still there today, and if I ask the same to Siri literally nothing happens. Siri just goes away and pretends I didn't ask it anything. But should it?

It seems to me that as an interface to Siri commands, something along the lines of AppleScript would be a pretty good fit. What if developers could mark commands in our AppleScript interfaces to be exposed to Siri?

I realize Apple is doing its best to make sure AppleScript just fades away, but this seems to be a pretty big missed opportunity on their part. 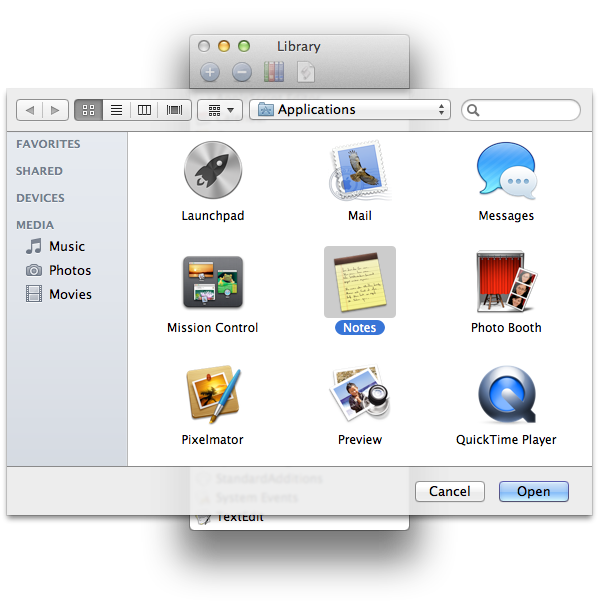 Overtime iTunes libraries can get pretty big and having to filter through all the songs in the library can be a tough task. This is a short script I wrote when I wanted to create a workout playlist but didn't want to listen to my entire iTunes library. The script plays a 10 second preview of all the songs in a playlist, thereby making it easier to create a list of the songs that would be best suited for my workout. Like all the scripts on this page this script can be setup to be called with a simple keyboard shortcut such as CMD+M.
⇐ ⇐ Get IPlayer Automator
⇒ ⇒ PDF Merger
Related News